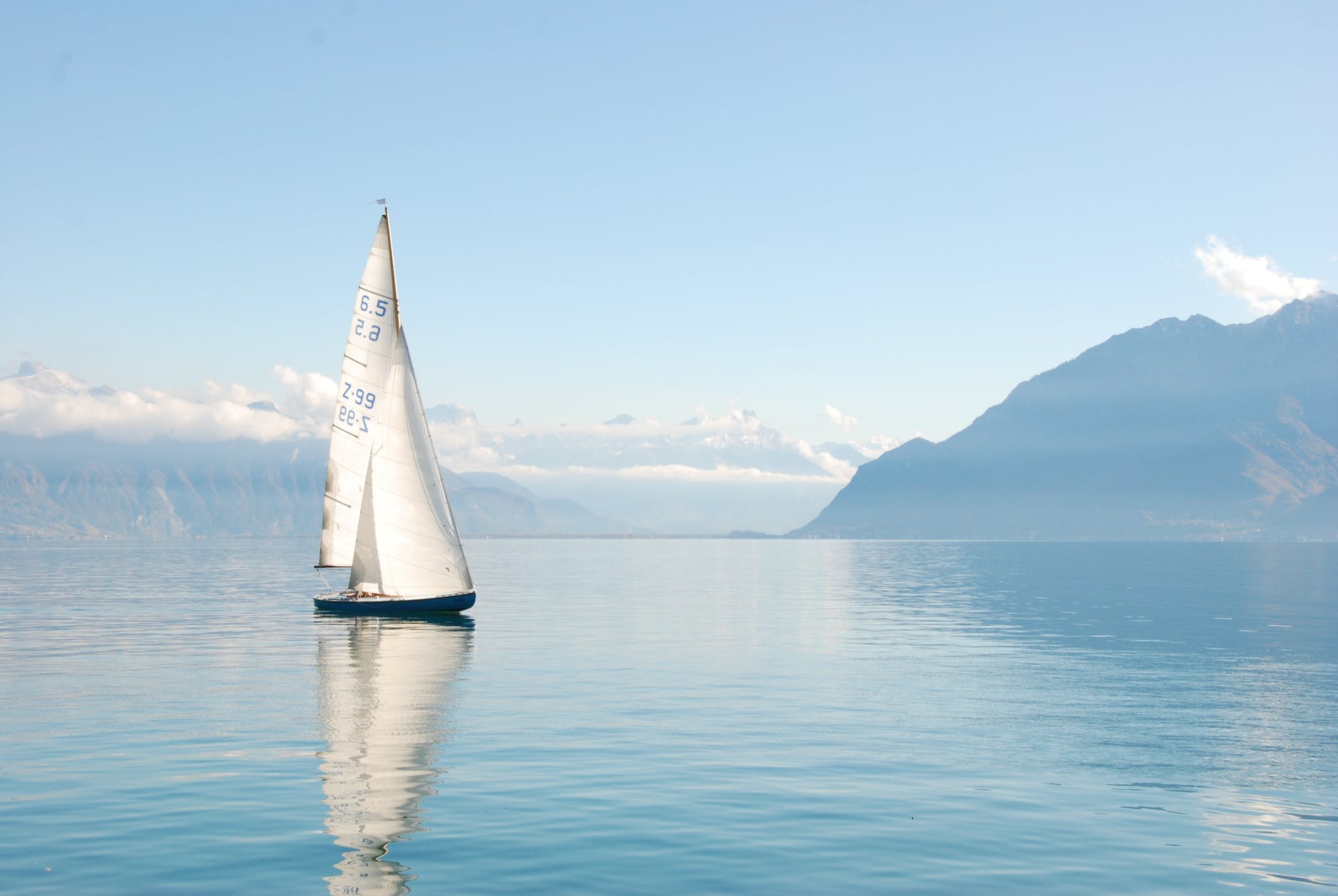 No sooner had Jesus the Healer stepped out of the boat on the shores of Gennesaret than he was recognized by individuals. Before long, the sick flooded to him and beds lined the streets with those who could not walk, hoping to touch the edge of His garment.

And whithersoever he entered, into villages, or cities, or country, they laid the sick in the streets, and besought him that they might touch if it were but the border of his garment: and as many as touched him were made whole. (Mark 6:56, KJV)

He had visited the other side of the Sea. There He was immediately known as Jesus the Stronger to the legion of demons (perhaps 3,000 to 6,000 in number) before they surrendered their host for a herd of pigs. Once considered to be beyond hope or reach, the liberated man gratefully bore witness to his mighty deliverance and testified throughout the Decapolis of the One who had set him free (Mark 5:1-20).

When a strong man, fully armed, guards his own palace, his goods are in peace. But when a stronger than he comes upon him and overcomes him, he takes from him all his armor in which he trusted, and divides his spoils. (Mark 11:21-22, NKJV, Bolded for emphasis).

Jesus entered the synagogue in His home town Nazareth where He had grown up, well-known to His own people. This time, when Jesus the Preacher declared His mission to fulfill Isaiah’s prophecy, the people could only see the kid they knew, the son of a carpenter. “Is this not Joseph’s son?” they reasoned, before they threw Him out of town! Unfazed by their rejection, Jesus moved on to another synagogue in Capernaum to deliver a man from demons, and from there He continued to preach at different synagogues in Galilee (Luke 4: 16-36, 44).

Jesus frequently entered homes. He visited the home of Simon Peter where Simon’s mother-in-law lay sick in bed. When Jesus the Miracle worker rebuked her fever, it left her immediately! (vs. 38-39) Later, he entered the house of Martha (sister of Mary and Lazarus), and befriended them and enjoyed their company (Luke 10:38). But He was Jesus the Resurrection when He raised up Lazarus from the dead (John 11). Jesus also entered Jairus’ house and raised his dead daughter back to life (Luke 8:41-56).

Sometimes Jesus meets us in unexpected places. Being short in stature, Zacchaeus had climbed up a tree. The most he hoped for was to catch a glimpse of Jesus as He entered Jericho, in the midst of a throng of people. To the chagrin of the crowd, Jesus the Unpredictable looked up to the tree and called out to Zacchaeus that He had come to visit him. Caught by surprise, it is small wonder Zacchaeus did not fall out of the tree! When Jesus entered Zacchaeus’ house, the once stingy hearted and greatly despised tax-collector, suddenly oozed generosity…

Then Zacchaeus stood and said to the Lord, “Look, Lord, I give half of my goods to the poor; and if I have taken anything from anyone by false accusation, I restore fourfold.” (Luke 19: 1-10, NKJV)

Wherever Jesus entered – cities, towns, the country, homes and individual lives – nothing and no one remained the same. The Gospels reveal a God who truly loves and cares for people.

How God anointed Jesus of Nazareth with the Holy Ghost and with power: who went about doing good, and healing all that were oppressed of the devil; for God was with him. (Acts 10:38, NKJV)

Now, do you suppose that Jesus has stopped entering towns and houses and lives? Or is it that we fail to recognize Him?

We are not unlike the Two downcast souls who had left Jerusalem, after Jesus’ crucifixion to walk seven miles to Emmaus. They were surprised that the Stranger who joined their trek was oblivious to the recent events that had shaken both the political world and religious rule. Mile after mile, this pleasant Stranger stoked a fire of hope in their hearts as He shared Scriptures about the Messiah. Only when He blessed and broke bread, did they recognize that it was the Lord! (Luke 24:13-31)

We may not initially recognize Jesus in our dreams. Yet, when we seek Him, we find Him. Dreams from the Holy Spirit bring messages from God, but the Messenger is discerned by what He does or speaks.

I once dreamed of trying to access a building. Every external door was closed and no one responded to my knocks. Suddenly a 6 or 7 year old little boy, who I did not know, walked up to me. It was a beautiful day and he was looking for someone to play with. I didn’t have time to play. “Please wait here by this door, and I will be back soon,” I said. He patiently waited while I knocked at all the doors again, with no success. When I returned to the little boy, the door beside him had opened. He smiled at me and did not speak a word.

I awakened and pondered. Who was the little boy and why was he in my dream? How could he have opened a door that was locked to me?

Suddenly, I recognized Him!

“That little boy was You, wasn’t it, Lord?” I said, knowingly. And I discerned the message: He is the one who opens doors and closes them (Revelation 3:7), and child-like faith in Him always proves to be more effective than our very best efforts!

In another dream, I was standing at a checkout counter and the woman behind the counter opened the cash register and started to hand me money, multiple bundles of bills. I was granted special favor simply because she saw my ring. It had a dark blue sapphire set in gold and it was on the ring finger of my left hand.

How puzzling! I thought, because I had neither bought nor sold anything. At first glance the dream resembled a tale told by Scheherazade from One Thousand and One Arabian Nights. But it was not.

In the parabolic language of dreams, a ring (and other round things) represents Covenant, and dark blue is a spiritual color representing Communion with God or Revelation. The ring in my dream, was on the ring finger of my left hand. We could go deeper into symbolism, (such as: the woman in this context represents the Holy Spirit, the stone represents the Rock [Jesus], and the gold signifies His Divinity) or suffice to say, through Covenant relationship with Jesus, we have favor with God.

So Jesus is the One who has enacted a new covenant with a new relationship with God so that those who accept the invitation will receive the eternal inheritance he has promised to his heirs. For he died to release us from the guilt of the violations committed under the first covenant. (Hebrews 9:15-17, The Passion Translation).

As we seek Jesus, we may find Him throughout the Scriptures (as the Passover Lamb in the Book of Exodus, as the Kinsman Redeemer in the Book of Ruth or as the Suffering Servant in the Book of Isaiah), and in every other Book of the Bible. We may hear testimony of a miraculous healing in response to prayer, where no fleshly man ever laid a hand to touch another. Or at times, He may be seen in the kindness of one stopping to give half a sandwich to a hungry soul.

We often find Him in the company of followers of Jesus. But how often have we gathered in His Name, sung gustily songs of praise, listened to an artfully prepared sermon, yet failed to discern the sudden Peace when the Prince of Peace enters a room? He promised:

For where two or three are gathered together in My name, I am there in the midst of them. (Matthew 18:20, NKJV)

The truth is, Jesus enters our lives every day … let’s be watchful so that we may recognize Him, (whether He enters our church, our home, or our dreams) and welcome Him. Amen!