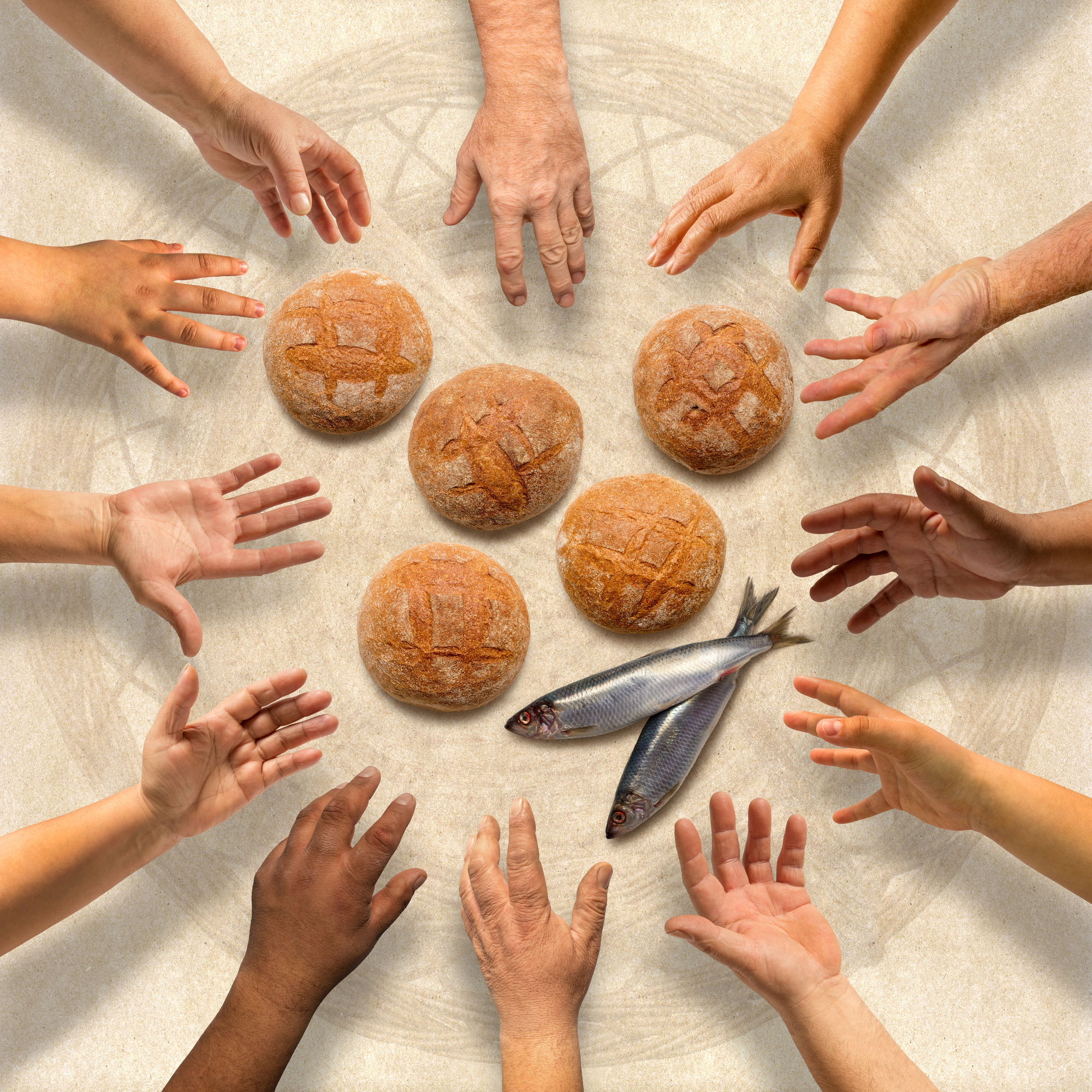 Green grass. It was a strange clue, but such is the parabolic language of the Holy Spirit. Last weekend, as I pondered and visualized the miraculous multiplication of bread and fish documented in Mark chapters 6 and 8, the Lord drew my attention to the grass. First the grass, then the groupings, and suddenly… a message behind the mystery!

Picture the scene: A sunny grassy deserted place near the Sea of Galilee. Five barley loaves were blessed to feed 5,000. Since barley was usually harvested in March around the time of Passover it was the beginning of Spring.

Then He [Jesus] commanded them to make them all sit down in groups on the green grass. So they sat down in ranks, in hundreds and in fifties (vs. 39-40).

Symbols and analysis: Green = life, growth, prosperity. Springtime= fruitfulness, growth. Bread (The loaves) = The Word. Five (5) = Grace. Twelve (12)= the divine Government of God, apostolic authority, the Kingdom of God. Fifty (50) = Jubilee, a celebration of liberty, releasing of debt and returning property to original owners. Together, these elements paint a perfect picture of Redemption. He makes me to lie down in green pastures (Psalm 23: 2).

The Word of Grace (5 loaves) and 2 fish fed 5,000 (the generation of the Redeemed), and 12 baskets remained (spiritual authority, the government of God).

Picture the scene:  A barren wilderness place. (No grass is mentioned. The people sat on the ground).

(Jesus said)“I have compassion on the multitude, because they have now continued with Me three days and have nothing to eat. And if I send them away hungry to their own houses, they will faint on the way; for some of them have come from afar.” Then His disciples answered Him, “How can one satisfy these people with bread here in the wilderness?” He asked them, “How many loaves do you have?” And they said, “Seven.” So He commanded the multitude to sit on the ground.” (vs. 2-6a).

The people stayed in the wilderness with Jesus for three days! Often a barren area or symbolic of a season of transition, the wilderness is a place where God makes provision for His people, as discussed in my previous post.

In Exodus 16:32 Moses said, referring to the manna that God fed to Israel in the wilderness, “This is the thing which the Lord has commanded: ‘Fill an omer with it, to be kept for your generations, that they may see the bread with which I fed you in the wilderness, when I brought you out of the land of Egypt.’ ”

Symbols and analysis: Three (3) = a perfect number, the perfect witness of the Father, the Son, and the Holy Spirit. Seven (7) = covenant, perfection, completion. Forty (40) = the wilderness; a place of testing (to determine if we will continue with the Lord or quit) or a place of transition from bondage (Egypt) to the Promises of God.

Four Thousand (4000) = 40 x 100= the Wilderness Generation (those under covenant but not yet walking in the promise).

God’s covenant word (7 loaves) and a few fish fed 4,000 (the wilderness generation) who tarried with the Lord, and 7 baskets (perfection/completion) remained.

Interpretation: “God’s Covenant Word brings perfection or completion (an end to the process) to those in the “wilderness” who continue with the Lord. “

A MESSAGE BEHIND THE MULTIPLICATION: These amazing miracles demonstrate the power of God’s Words. Whether we find ourselves in a fruitful place (grassy slopes) or in a barren wilderness waiting for the fulfillment of God’s promises for our lives, God’s Word will sustain, protect and perfect us, and bring an increase of spiritual authority.

The Mystery of Leaven

Now the disciples had forgotten to take bread, and they did not have more than one loaf with them in the boat. Then He (Jesus) charged them, saying, “Take heed, beware of the leaven of the Pharisees and the leaven of Herod.” And they reasoned among themselves, saying, “It is because we have no bread.” (Mark 8: 14-16)

Leaven is the hidden ingredient that makes the dough in bread, cakes and biscuits rise. In reminding His disciples about the multiplication of the loaves, Jesus was making it clear that He was speaking of a different kind of leaven: spiritual leaven (the Holy Spirit).

Jesus said in John 6:63 It is the Spirit who gives life; the flesh profits nothing. The words that I speak to you are spirit, and they are life.

“The kingdom of heaven is like leaven, which a woman took and hid in three measures of meal till it was all leavened.” (Matthew 13:33)

What was the “leaven of the Pharisees”? After Jesus had ministered to the people, the Pharisees came to fuss with Him at Dalmanutha insisting that He give them a sign to validate Himself. They presented themselves as experts on religious matters, promoted the “traditions of men”, yet failed to recognize the Son of God standing right in front of them. Jesus sighed. No sign would be given to “this generation” (their religious population) (Mark 7:1-13, 8:11-12).

The “leaven of the Pharisees” may very well have been a religious spirit. (II Timothy 3:5a having a form of godliness but denying its power.) This kind of spirit frequents churches and religious gatherings, hence its name. It does not quit challenging and testing, and can bring weariness. Jesus left Dalmanutha again because of the Pharisees!

What was “the leaven of Herod”? Herod is a title, not the name of one individual. We see in Mark chapter 6 that Herod had married his brother’s wife (not widow), an adulterous act under the Law. He idolized his niece (his step daughter), and killed John the Baptist to satisfy a prideful vow. The earlier King Herod had murdered all baby boys in Bethlehem aged two and younger because he was jealous of the newborn King. What a “killer” resumé!

Herod’s spirit appears to be a corrupt and idolatrous authority that works to destroy anyone it views as a threat with little consideration of the collateral damage. This kind of spirit operates through oppressive leaders or governments.

WARNING! A Tag-Team of Evil: The religious spirit and Herod’s spirit opposed Jesus and later, His Disciples. Throughout Scripture, we see how this evil tag-team of governmental leaders and the religious elite work against God’s servants – John the Baptist, Jeremiah, Micaiah (1 Kings 22) , Daniel, Elijah, and many others. These two spirits continue even to this day to oppose the Holy Spirit and especially the Lord’s prophets!

Two fish or a few fish?

The fish also multiplied. Fish symbolize souls and evangelism, since Jesus introduced the concept of “fishers of men.”

“By the mouth of two or three witnesses every word shall be established.” (2 Corinthians 13:1).

Jesus sent his Disciples out in teams of two (two fish) to proclaim the Kingdom, heal, cleanse, deliver from demons and resurrect the dead. Only two fish with five loaves were necessary to feed 5,000.

GRACE! GRACE! The Word of Grace will reach more people by the Spirit than by effort. Perhaps more evangelism (a few fish) is needed in the wilderness because of spiritual warfare (there live the wild beasts) (Isaiah 34:14, Mark 1:13). However, Jesus has demonstrated, through His own wilderness experience that we may overcome the schemes of Satan and his surrogates by declaring the Word of God!

Unleavened Bread and the Blood

This is Passover week, and we remember how Israel ate unleavened bread in haste to prepare to leave Egypt (bondage).  They sprinkled blood from unblemished lambs on the lintels and doorposts of their homes.

That night, the Angel of Death passed over the homes of the children of Israel because it saw the blood. On the contrary, death struck the first born Egyptians because their homes were not protected by the blood.

We have passed from death to life and can be forgiven of our sins because of the One who is our Passover Lamb, Jesus Christ. In fact, the Apostle Paul reminds us that unleavened bread is a symbol of our separation from sin.

Do you not know that a little leaven leavens the whole lump? Therefore purge out the old leaven, that you may be a new lump, since you truly are unleavened. For indeed Christ, our Passover, was sacrificed for us. (1 Cor 5: 6b- 7)

CLEANSED AND DELIVERED BY THE BLOOD: As we think about the redemptive work of Jesus Christ, the Lamb of God whose Blood was shed for the sins of the whole world, we are thankful for His suffering, death and intercession for us. Perhaps there is no better time than the present to ask the Lord to rid us from any “old” leaven: any worldly spirit or even “traditions of men” that oppose the Holy Spirit!

Dear friends, thanks for joining me on this journey of discovery. Have a Blessed Pesach and Easter weekend!