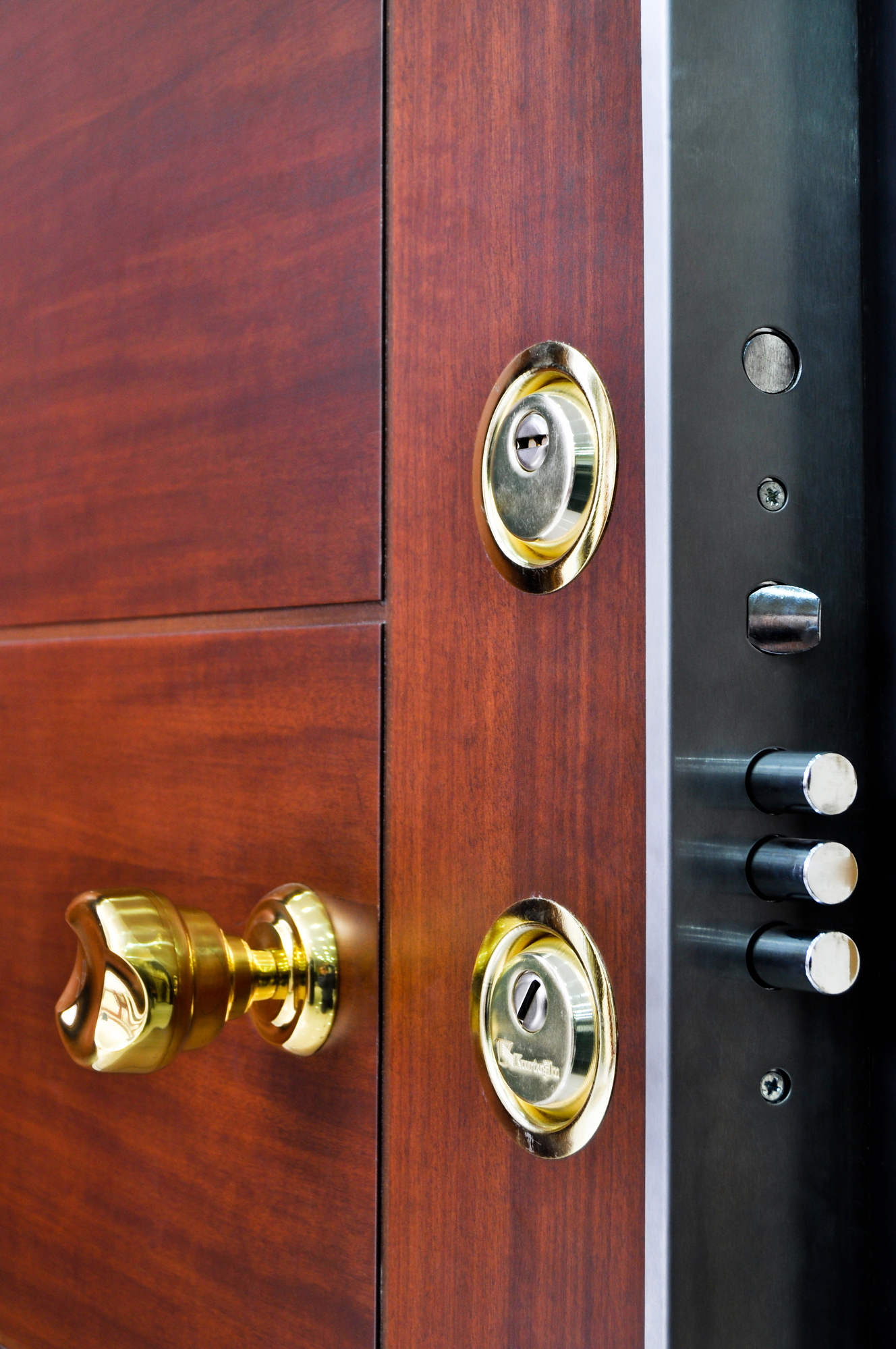 Once upon a time, in lands faraway and very nearby, the people faced a common threat. Roving bands of raiders brazenly attacked the houses of the rich and the poor alike. Whether in broad daylight or under cover of darkness, in town after town, and street after street, the scourge left behind a trail of destruction and loss.

The Institutional Organization collaborated with local governments to issue bulletins across all media platforms to educate citizens about how to protect their houses.

As the story goes, there were two widows, Mrs. Ima Wake and Mrs. Mee Kenwise, who lived on De Sernmint Street. They had shared a special friendship for many years, but now they shared a formidable foe.

Mrs. Ima Wake was well read and listened daily to media bulletins and recommendations on how to protect her home. So, she promptly had two approved Gen Locks (G-Locks) installed on her front door, and posted the required signs in her front yard.

Mrs. Mee Kenwise also listened to the bulletins, but she feared the Lord more than the raiders and prayed daily for His guidance. She learned that some G-Locks had leaked toxic or corrosive material which caused irreparable damage, and even worse, the sophisticated G-Locks could not be uninstalled!

As Mrs. Mee Kenwise prayed, her wisest and kindest Friend came to visit. Shep Goode always responded to prayer. He arrived armed with His usual smile, twinkling eyes, and some nifty ideas.

First, they installed a special Lamp inside the house. During the day, it produced a blinding thick cloud which amazingly enhanced the vision of those inside. At night, the same Lamp glowed like a consuming Fire that was completely harmless to those inside it.

Then, together they camouflaged the zinc coated chain-link fence around her house with a special climbing vine of Ivy. Surprisingly, it was poisonous to the raiders but perfectly safe to those at home.

The renovations were finished not a day too early, because that very night, the raiders targeted De Sernmint Street. They trampled Mrs. Ima Wake’s yard signs then broke her windows. Although the front door was barricaded by two G-Locks, the back door was easily kicked down. The terrified homeowner hid under her bed while her house was pillaged.

The raiders soon targeted Mrs. Mee Kenwise’s home and easily scaled the zinc fence, but the strange fiery glow in the windows stopped them in their tracks.

Surely this house is on fire, they thought, So why does it not burn? Puzzled by the phenomenon, they immediately departed to attack other homes instead.

Now the raiders had intended to revisit De Sernmint Street, but an unbearable affliction interrupted their plans. Shortly after contact with the Ivy on the zinc fence, and for almost three weeks they suffered an itchy rash and blisters.

After several days of sudden peace and quiet, everyone noticed that the raiders were absent. Mrs. Mee Kenwise guessed the reason for this:

Who would have thought that a house could be so easily protected from a dangerous enemy by a Lamp and a zinc chain-link fence with Ivy? How simple yet wise are the ways of God! she said to herself as she recalled the Scripture:

Excitedly, she shared what had happened at her house with everyone who would listen, including her dear friend and neighbor. Mrs. Ima Wake was naturally upset that her house was attacked, but decided that the zinc fence, Ivy and Lamp account sounded too simplistic to be true.

Rather than acknowledge that the Lamp and the Ivy had played a role in deterring the raiders, the Institutional Organization and local governments dismissed the theory as farmyard nonsense. It was not that the strategy was disproven, but rather because billions of dollars had already been invested in developing the sophisticated G-Locks.

Fully aware that the raiders were still breaking into houses with two G-Locks, the Institutional Organization and local governments downplayed this information. They recommended that residents continue to install the G-locks, add a third G-lock to further bolster vulnerable front doors, and display their yard signs to demonstrate compliance. (No direction was given on how to safeguard windows or back doors).

The authorities determined to engage in information warfare to persuade those who had not installed any of the G-locks. Soon, every media platform announced that the two G-locks were an amazing success and had deterred the raiders. Everyone everywhere was ordered to install at least two G-locks on their front doors whether they wanted to or not. Law enforcement agencies were enlisted to enforce the ruling.

Mrs. Ima Wake trusted in the wisdom of the authorities and the innovative technology and promptly had a third G-Lock installed on her front door, but many other residents were far less inclined to do so.

No one was allowed to question or discuss the vulnerabilities of the plan (the toxic corroded locks, irreparable damages, or the exposed back door), and anyone who dared to share information about the Ivy on the zinc fence was promptly silenced.

Even worse, the authorities labeled residents that did not install G-Locks a risk to society and blamed them for the continued raids. Soon, neighbor was pitted against neighbor and once harmonious communities became divided.

Though the raiders never again ventured onto Mrs. Mee Kenwise’s property for fear of the Ivy and the Fire, she felt saddened by the disunity among the people. When she prayed that peace would return to De Sernmint Street, Shep Goode promptly arrived armed with His smile and words of wisdom:

“This division is due to a lack of understanding and discernment.” He continued, “For there is God-appointed authority which speaks the truth and there is false authority. Whatever comes to steal, to kill or to destroy, and whoever lies and deceives is not from Me. I am frequently accused of things I am NOT responsible for by those who do not know Me, but I am the Good Shepherd who lay down His Life. Be very assured that I have come to give Life (and salvation, health, deliverance, and restoration), and in abundance, not to take it away.”

“The raiders may bypass two or many G-locks or even use an A-frame step ladder to climb over a fence with Ivy, but they will never escape My Fire!”

“My will is that every house has a Lamp lit to see clearly and to burn with My passion,” He added with a twinkle in His eyes. “For then there will be true discernment and understanding.”

His brow furrowed ever so briefly, and then He smiled again. “The things that divide must go so the people can come together again. Trust Me to resolve this matter.”

But the natural man does not receive the things of the Spirit of God, for they are foolishness to him. If anyone among you seems to be wise in this age, let him become a fool that he may become wise. (I Corinthians 2:14a, 3:18b)

How does this tale end? Just as the Good Shepherd said, He knows exactly what to do. For His solutions are simple yet perfect, because even the foolishness of God is far wiser than men, and the weakness of God is stronger than men (I Corinthians 1:25).

In the parabolic language of the Bible, a house represents a person’s life because it is where he or she lives. The Lamp is the Word of God and His Spirit which gives guidance and protection – like a cloud by day and a fire by night (as Israel experienced in the wilderness). With some imagination, the reader can discern the meaning of other symbols.

As the parable suggests, let us not put our trust in earthly wisdom, but invite Jesus the Good Shepherd into our hearts and homes. Let us be prompt to seek His guidance, obey His instructions, turn on the Lamp of His Word, and release His Fire.

May we trust the simple solutions of God and grow foolish to this sophisticated world so that we can gain true wisdom. Amen!