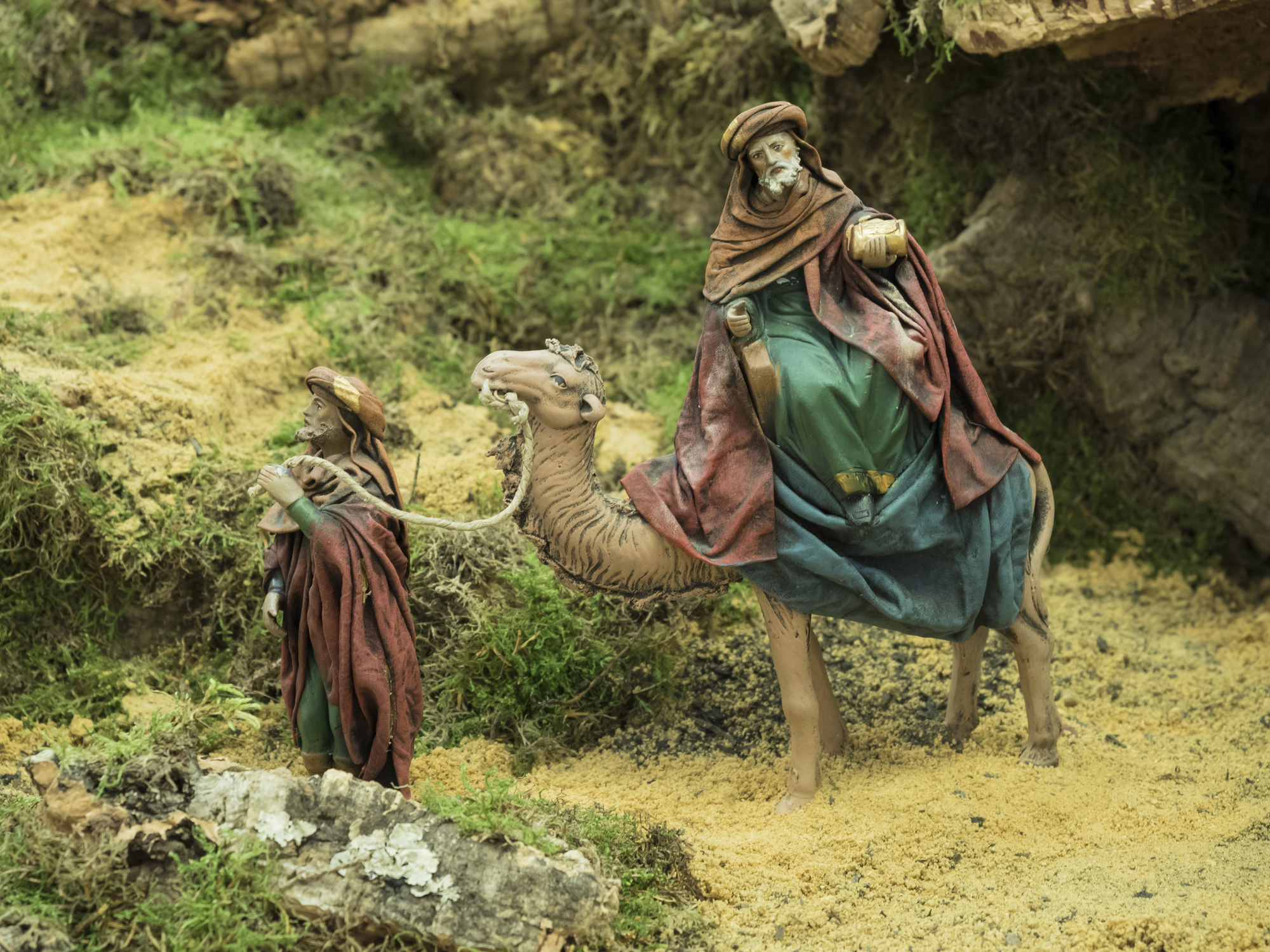 Sometimes there are many witnesses to miraculous events, but most of the time supernatural windows open to an audience of one. Ezekiel’s eyewitness account of the moveable throne of God, Elisha’s fiery horsemen with chariots, and John the Revelator’s end time visions were all amazing individual encounters. Indeed, God seems more impressed with how people respond to His message than crowd size, and He watches over His Word to fulfill it.

Abram (later named Abraham) was on his way home from battle with the spoils of war. He had traveled over one hundred miles (160 km) from the northern town of Dan, with another 25 miles left on his journey, when he was met by Bera, the king of Sodom, in the Valley of Kings just east of Jerusalem.

Then, a mysterious king and priest named Melchizedek brought out bread and wine, blessed Abram, blessed God, and Abram gave him a tithe.

Following this, Bera offered Abram some of the bounty. (The entire account is recorded in Genesis 14 and Hebrews 7).

An Encounter with El Elyon

Abram knew YHWH (Yahweh or Jehovah) the God of Covenant who had led him from his homeland to Canaan (Gen 12:7, 13:14). But when he met Melchizedek, priest of El Elyon and king of Salem, it was Abram’s first encounter with God the Most High (Yahweh El Elyon), “the Possessor of Heaven and earth ” who had given him victory in battle.

Who is the Most High? He rules over the earth, kingdoms and nations, and promotes and removes leaders of His choosing (Psalm 47:2, Daniel 4:17, 25). He hears our vows (Psalm 50:14), protects us from danger (Psalm 91), and His Voice thunders from Heaven (Psalm 18:13). Jesus was respectfully addressed by demons as Son of the Most High (Mark 5:7, Luke 8:28), and He demonstrated Power over storms, waves, and even the fish in the sea.

From the text, it appears that the king of Sodom neither witnessed the encounter with Melchizedek nor the transaction of the tithe, for Abram “vowed” not to take any of the spoils. (He was quite candid about the bounty for his 318 servants and 3 neighbors who accompanied him to battle).

(Several translations of Hebrews 7:4 state that Abraham gave a tenth of the “spoils” to Melchizedek, but the Greek word “akrothinion” can also be translated as “the top of the heap” or “first fruits.”)

Opinions vary concerning the identity of Melchizedek and you probably have your own. Some say that he is Shem, the son of Noah, or a contemporary of Shem. However, Hebrews 7:3 states Melchizedek has no genealogy.

Also, would the priest of the Most High and “righteous” king of Salem (Jerusalem) rule over the pagan stronghold it was in Abram’s day? God is holy.

The Canaanites worshipped other deities and refused to surrender Jerusalem until King David (about 1000 years after Abram) wrenched it from the Jebusites and made the city the capital of Israel.

Some Christians believe Melchizedek is Jesus because he was a king-priest who brought out bread and wine. Moreover, God swore that Jesus’ priesthood is “after the Order of Melchizedek” (Psalm 110:4, Hebrews 7:17).

However, in parabolic language, to be “like” something does not mean it “is” (Hebrews 7:15).

I asked questions and the Lord answered. The first thing I heard was, “Do angels have genealogy?” Angels are spirits. They have no parents, their lives have no beginning or end (except from God’s perspective), and they sometimes look like men (Hebrews 13:2).

Everything I share here came by revelation, and I acknowledge it may just be a small part of the whole picture.

Elijah is considered to be a forerunner to John the Baptist, but Jesus stated the Baptist was greater than all who came before him.

Levi came before the Levitical priesthood that was named after him, but Levi was not greater than Aaron (the high priest).

Similarly, Melchizedek manifested the heavenly priesthood (in our earthly dimension) before Jesus came in the flesh. The priesthood is named after him (Order of Melchizedek) to differentiate it from the Order of Aaron.

I began to see Melchizedek as one sent by God as a messenger (like the Angel of the Lord) and a forerunner. He is priest of the Most High, but the greater One is Jesus Christ, the Most High, God the Son and our eternal High Priest.

On the heels of Abram’s encounter in Genesis 14 comes Genesis 15:1:

After these things the word of the Lord came to Abram in a vision, saying, “Do not be afraid, Abram. I am your shield, your exceedingly great reward.” (NKJV, Bold font is for emphasis).

That night, God encouraged Abram to ask about the promised reward. (There he was, an old man with no children, who obediently left his homeland to journey to Canaan and live among heathen).

The reward was that his offspring would be as great in number as the stars, they would inherit the land as a great nation and through Abram’s Seed all nations would be blessed (Genesis 15:2, 12:2, 12:7, 13:14-17). Abram believed God!

In every encounter, beginning in Genesis 12, God spoke with Abraham about his descendants and inheritance (seven times by my count). Is there reason to suppose that Melchizedek introduced a new topic to the patriarch?

It is entirely possible that a supernatural dimensional portal was opened to Abram to meet Melchizedek in the holy New Jerusalem (Revelation 3:12, 21:2). Abram was amazed by what he saw: a new City and his Seed.

By faith he [Abraham] dwelt in the land of promise as in a foreign country, dwelling in tents with Isaac and Jacob, the heirs with him of the same promise; he waited for the city which has foundations, whose builder and maker is God (Hebrews 11:9-10).

Abram saw his Seed (Galatians 3:16), the Priesthood of Jesus and the bread and wine, symbols of the New Covenant. He saw that his Seed (Jesus) would be a blessing to all nations, just as God promised, and God sealed His Word with an oath (covenant) (Genesis 15, 17).

Jesus said to the Jews: Your father Abraham rejoiced to see My day, and he saw it and was glad (John 8:56).

The Tenth Part of… a Promise?

Furthermore, Abram’s tithe (his first fruits) appears to be related to his Promise, not finances.

Before any of his ten were born (eight sons, plus two grandsons), Abram gave a tenth part of his Promise (his descendants) to God. Since the Promise came through his son Isaac (Romans 9:7), Abram essentially dedicated Jacob (renamed Israel) to the Most High. Is this why Israel belongs to God?

How did the Levites, long before they were born, give the tenth part (Israel) to Melchizedek through Abraham?

A dimensional portal opened to Abraham’s grandson Jacob through a dream recorded in Genesis 28:11-22. He promised to give a tenth part to God because Abraham had taught Isaac and Jacob about the covenant (Genesis 18:19).

So, by faith, Jacob dedicated his descendants before they were born. His descendants, the Levites, served the Most High, and subsequently, his sons of Promise will be saved through his Seed (Jesus). Israel will be saved (Romans 11:16).

In their service before God, the Levitical priests dedicated and blessed Israel as they did from Abraham’s loins. In fact, the High Priest’s garment included the names of the tribes engraved on stones on his shoulders and on his breast plate offered as a continual memorial before the Lord (Exodus 28:11, 12, 29).

Under the Law, God made provision for the people to participate through a tithe of their obedience (produce/offerings) (Deuteronomy 12:11), because faith was no longer widely exercised after Israel’s stay in Egypt.

A Window to God’s Promises

1. A dream, vision or encounter can open a dimensional Window in the spirit. (And we must exercise spiritual discernment and understanding – a future blog topic).

2. The tenth-part is a spiritual transaction of faith and obedience. Abram gave his heirs of Promise to God.

3. The Law only commands obedience, but Lord Jesus (the Seed of Promise) requires faith with obedience (Romans 4, 5:1-11).

4. Patience and trials often precede the Promise, i.e. Abram’s bounty temptation, his 25-year wait, then near sacrifice of his Promise (Genesis 22).

5. God’s viewpoint may be different from ours. i.e. Jacob favored Joseph (and Rachel), but God chose Leah’s sons (Judah) for the Seed line and (Levi) the priesthood.

6. God watches over His Promise to fulfill it.

A recent dream (while writing this post): A lion watched me intently as I read aloud instructions from a bottle label. My words were echoed, sentence by sentence, by a Prophetess/ Intercessor who was on the porch outside my open front door (the future). l could not see her but could hear her voice.

Interpretation: Whenever God speaks through a Window to a Promise, the Lion of Judah watches over His Word to confirm and fulfill it. Our part of the transaction is – you guessed it – faith and obedience. Amen!