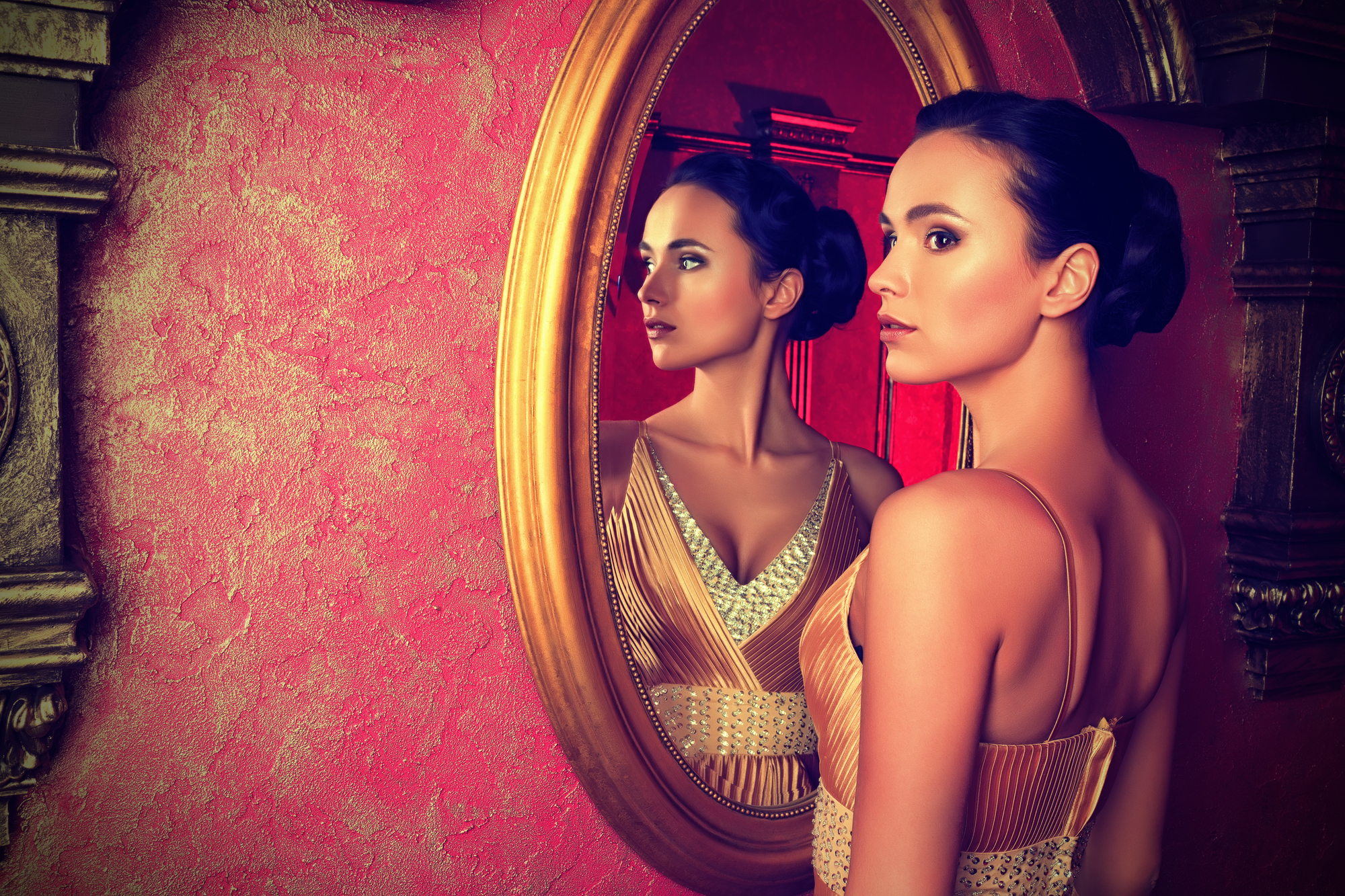 The modern glass mirrors that we find in homes, public spaces, purses and cars, have been around for about two hundred years. (Exclude “smart” mirrors, the talking ones in Snow White and the portals in Alice Through the Looking Glass). Mirrors help us to see ourselves as we are seen, and make fascinating dream symbols. Though rarely mentioned in Bible translations, several Scriptures possess similar “reflective” qualities. For example:

For if anyone is a hearer of the word and not a doer, he is like a man observing his natural face in a mirror;  for he observes himself, goes away, and immediately forgets what kind of man he was. But he who looks into the perfect law of liberty and continues in it, and is not a forgetful hearer but a doer of the work, this one will be blessed in what he does. (James 1:23-25 NKJV)

For with what judgment you judge, you will be judged; and with the measure you use, it will be measured back to you. (Matthew 7:2, NKJV)

The law of the Lord is perfect, converting the soul (Psalm 19:7a, NKJV)

Spiritual dreams about mirrors invite us to look deeper so that our souls (thoughts, opinions, desires and feelings) may become aligned to the Word of God. I will share two different mirror themed dreams in this post.

A few years ago, the Lord connected me to a small group of women Intercessors. We met weekly to pray for whatever He revealed about nations around the world. Our assignments were guided by research, revelation, dreams and visions. Sometimes the Holy Spirit would change direction and lead us to pray for more immediate needs, such as someone’s healing. One night, we were praying for the relative of one of the Intercessors when I felt led to share a dream I had seen a few days prior.

Dream Scene: THE WOMAN IN THE MIRROR
In this colorful dream, I was facing a full-length wood framed mirror in a bedroom, but the person looking back at me was a complete stranger. She was a petite blonde with long hair. I looked around the room and somehow knew I was in an upstairs bedroom of a beautiful home. The magenta pink walls had scuff marks and needed to be repainted (end of scene).

From my description, the Intercessor whose relative we were praying for recognized the person and the room, even though the person had aged and become a brunette. By sheer coincidence (a God-incidence), I had dreamed of the same person we were praying for that night! We prayed for inner healing, particularly for a cleansing of her emotions. (To understand the symbolism of repainting a wall, please read this post (Overwriting the old with the new).

Time went by and I forgot the dream. Almost ten years later, the same woman was unexpectedly hospitalized. Sadly, she succumbed to her illness. I attended her funeral service and watched as old photos scrolled on the overhead video monitor. How surprised I was to see the same face with the long blonde hair!

Interpretation: Mirrors (as do windows and doors), sometimes “frame” mini visions within a dream. The wall color magenta gave a clue that there was an issue with the emotions (soul), the image in the mirror. The physical body ages, but the soul and spirit are ageless and those who belong to Christ are promised new non-decaying bodies in the Resurrection (see 1 Corinthians 15). Our souls look like younger versions of us, and our spirits are light. God gives these kinds of dreams to demonstrate how deeply He cares for all His children and He sends help when needed.

Things (and people) are not always as they appear on the surface. We have to look deeper, with spiritual eyes.

For the LORD does not see as man sees; for man looks at the outward appearance, but the LORD looks at the heart. (1 Samuel 16:7b, NKJV)

Every dreamer acquires his or her own dream “vocabulary” over time, so we must rely on the Holy Spirit to “see” symbols in context and arrive at the correct interpretation. For example, my dreams of Pastor Benny Hinn usually have something to do with learning about the Holy Spirit or healing gifts. But another dreamer might associate this symbol with the name Benjamin.

Several years ago, I dreamed that a small group of us (volunteers at the Healing Rooms) were students traveling to different locations with Pastor Benny. The dream had multiple scenes, and years passed before I understood this scene. (Here is a tip: Multi-scene dreams are usually fulfilled over a period of time).

Dream Scene: THE MAN IN THE MIRROR
Pastor Benny led us from a classroom to a small pedestal sink with a mirrored medicine chest (cabinet) on the wall above it. He asked me to turn my back to the medicine chest then he handed me a small hand-mirror.

“Look in the hand mirror, tell me what you see” He directed.
“Myself,” I responded and wondered if it was a trick question.

“But what do you see in the mirror behind you?” He asked. I saw a reflection of me holding the hand mirror, but suspected that was not what he was after. I was clueless.

Suddenly, a man’s face replaced mine. I bolted!

Pastor Benny was not amused. He sighed impatiently then led another student through the same exercise.

She too was surprised to see the man’s face, but correctly identified him as the One who had been standing at the front of the classroom while Pastor Benny taught our group a few minutes earlier. I agreed with her. Pastor Benny nodded and smiled without giving us an explanation (end of scene).

Interpretation: As mentioned in earlier posts, Lord Jesus sometimes appears in our dreams. He was the “Man” in the mirror. Not only is He with us, He is IN us. In fact, we are one with Him as the Bible tells us (1 Corinthians 6:17). When the Father looks at us, He sees us in His Son and this “transformation” happens through the power of the Holy Spirit. This dream was telling me that Jesus is the Healer (“medicine” chest) working through me.

When we look into the Word of God (the mirror) we initially see ourselves. We see that we fall short and recognize bad habits that need to go, but we are not quite sure how to accomplish this. The Apostle Paul describes this dilemma quite well in Romans 7. However, when we look deeper into the Scriptures, the Holy Spirit enables us to see our Lord Jesus Christ and to recognize ourselves in His likeness.

Smoke and Mirrors
Each time Ancient Israel looked into the mirror of God’s Law, they soon forgot what they saw, then looked to other nations to imitate. For example, in 1 Samuel 8, Israel wanted a king because other nations had kings. They pestered poor Samuel until they ended up with King Saul. That did not end well!

Hundreds of years later, Lord Jesus rebuked some “Woe to you” cities for not repenting and receiving His message. He invited them to look into the mirror called “history” and to learn from the past.

Perhaps the reason history repeats is because we forget past mistakes, our own and those of other people, cities and nations. Satan creates smoke screens to distract us, but the Word of God gives Christians the ability to “see” past the illusions.

For whatever things were written before were written for our learning, that we through the patience and comfort of the Scriptures might have hope. (Romans 15:4, NKJV)

Seeing the Word
Walking away unchanged from the “mirror” of the Word is like applying makeup which makes us look and feel good, temporarily. Real change comes when we begin to behold Jesus. Some of these changes include:

Obedience (we follow the Lord even if we must do so alone), Restraint (we are slow to accuse or hold others to standards we ourselves have not attained),

We gain wisdom, show honor, and demonstrate fruitfulness. We receive the Spirit of the Fear of the Lord!

Whenever we become confused or anxious, peace is restored when we refocus on the Word of God. The more we “see” the “Man” in the mirror (Jesus), the clearer things become. The smoke dissipates to reveal things as they truly are.

2 Corinthians 3:18 states: But we all, with unveiled face, beholding as in a mirror the glory of the Lord, are being transformed into the same image from glory to glory, just as by the Spirit of the Lord (NKJV). So let it be. Amen!