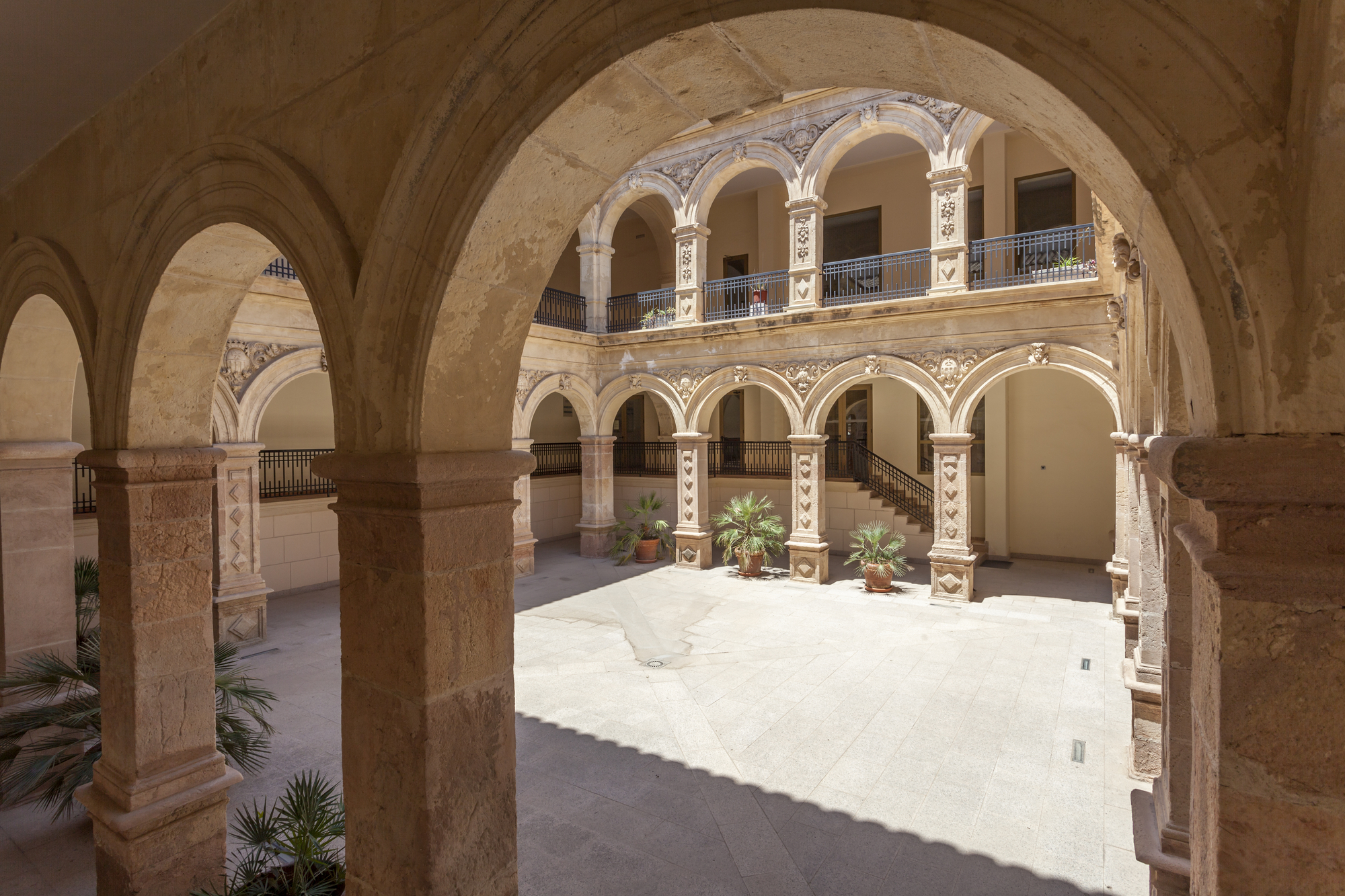 Scene 1:  I was on the upper level of a cloister (definition) watching a meeting in progress in the quadrangle (ground level). After the meeting, I followed the balcony to the other side of the building where I met some Catholics.

I accessed one of the rooms from the balcony and was amazed to see many pictures of Catholic Saints hanging on the walls. Even more surprising was the strong anointing I sensed, and said, “I do not know why, but I feel the Presence of the Lord in this place!”

Later, a dead body was found hanging from a balcony. It was identified as a young man who had gone missing since 1972. The story was, he was involved in some kind of mischief before he vanished. The body was brought to the room where we were, and unexpectedly the young man suddenly came to life!

Scene 2 (a vision):  I “saw” the same young man walking outside, very much alive, smiling and wearing sunglasses. He was in the company of some priests wearing black cassocks. I wondered if he was up to some kind of “mischief” again. (END)

Resurrection dreams are rare for me. I may have seen as many as five in over twenty years, so my interest was piqued. At first I thought about the Jesus People Movement that started on the West Coast (California) in the 1960s and attracted huge gatherings in 1972. However, the dream symbols (cloister, saints, meeting Catholics, priests in cassocks) point to the Catholic Church. Thus, I began to research the topic.

At a weekend retreat, two Catholics from Duquesne University in Pittsburgh, a graduate student (Ralph Keifer) and a history professor (William Storey), became acquainted with modern day accounts that mirrored the Book of Acts. Six months later, in February 1967, the two men attended a charismatic Episcopalian prayer meeting where they were Baptized in the Holy Spirit. (Please click here for Smith Wigglesworth’s testimony of his own Baptism experience).

Through the laying on of hands, Keifer and Storey were used to spread the Baptism to others at Duquesne, then to the University of Notre Dame (South Bend, Indiana) where they had previously been students.2 With the manifestation of speaking with other tongues, healings and other spiritual gifts, the spread continued to Michigan, other states and Canada. Prayer and worship covenant communities formed, including People of Praise in South Bend, and the Word of God in Ann Arbor. (These events ran concurrently with the Jesus People Movement in progress on the West Coast and were also influenced by Pentecostalism and the Charismatic Movement of the late 19th Century and mid-20th Century respectively)3.

Charismatic Catholics from Michigan and Notre Dame gathered together for fellowship in what would become the first of many annual conferences at Notre Dame. By the third annual conference (1969), a Communications Center was formed as an information hub for prayer meetings and the theological foundation for what was later called the Catholic Charismatic Renewal (CCR).  According to Ciciliot, the North American movement was viewed with suspicion by some traditional Catholics, especially priests. At one time, Ann Arbor was even labelled the “charismatic Vatican.”1

In 1972, as the renewal continued to spread, the International Communication Office (ICO) was established to manage a worldwide administration with benchmarks for all charismatic prayer groups and communities in the Church.1 (The Jesus People Movement was also in full swing with meetings and concerts drawing huge gatherings in 1972). By the early Spring of 1973, high-ranking Cardinal Suenens from Belgium (sort of the equivalent of a Chief Operating Officer at the Vatican) curious about the CCR, came undercover as a regular priest. Pleased with what he found, he made his true identity known. Cardinal Suenens became a mediator between the CCR and the Vatican. He participated in establishing guidelines for the Movement before it became organized under the Pope. “The ICO was relocated to Belgium in 1976 where Cardinal Suenens renamed it to the International Catholic Charismatic Renewal Office (ICCRO) in 1978; this office was transferred to Rome in 1981 and eventually to the Vatican in 1985.” (Ciciliot)1

Despite its reorganization within the Catholic Church, Charismatic Catholicism continues to this day, quieter, but with an army of 160 million strong.3 For a deeper understanding of these events, please access the links to the source articles placed at the end of this post.

A cloister, often the setting of a monastery or convent, symbolizes a covenant or spiritual community. Pictures of saints remind us of past holy lives marked by notable signs and miracles, now a part of the “cloud of witnesses.” The young man in this dream is symbolic of a Movement “left hanging” (an idiom for unfinished business). The corpse was not decayed; he was merely asleep and was resurrected by the Holy Spirit. The sunglasses signify brightness.

Interpretation: God intends to bring a glorious reawakening to a “grounded” (genuine) Move of God that became restricted after 1972 by benchmarks and guidelines, and was left unfinished.

For the earth shall be filled with the knowledge of the glory of the LORD as the waters cover the sea. (Habakkuk 2:14)

I also sense that instead of seeing how to fit Charismatic Catholics into the Catholic Church, it will be said, “Look how the Catholic Church is being transformed by the Holy Spirit!” The reawakening will be broader than the former, to reach college campuses, priests and local churches, and cloistered communities. Even non-Catholics, such as myself, will participate because this will not be a Catholic revival, but a Holy Spirit revival. Still, we can anticipate that mischief will also arise.

While writing this post, I recalled a randomly watched video of Dr. Myles Munroe (a greatly respected Bahamian evangelist and author) with a profound message. The next day, while I was still meditating on the wisdom of his words, the tragic news came of his death in a plane crash! Dr. Munroe spoke about how Samson annihilated 1,000 Philistines with a donkey jawbone (see Judges 15:15-17), but “he did not file a patent for the jawbone or trade it (trad-ition) to others as an effective military weapon. He simply threw it away.”6

By today’s standards, Samson did not write a book about his Jawbone strategy or establish Jawbone University or host a Jawbone Victory Crusade. Samson recognized the source of his victory as the Power of God, not the jawbone. Similarly, Moves of God are fueled by prayer and worship, and not by excessive organizing and planning.

Arise, shine; For your light has come! And the glory of the LORD is risen upon you. For behold, the darkness shall cover the earth, And deep darkness the people; But the LORD will arise over you, And His glory will be seen upon you. (Isaiah 60:1-2)

While God’s Light was shining brightly, history records many events in 1972 that were quite dark. Eleven Israeli athletes were murdered at the Munich Olympics by an Arab gunman who was part of a group named Black September. The Irish Republican Army clashed with the British in a bombing blitz called Black Friday. Terror may erupt unexpectedly, but Jesus is the Prince of Peace.

To date, 1972 has the worst crash record and was the deadliest year in aviation history: 2,429 deaths.7 (Not good. Plane crashes can symbolize the disintegration of large corporations and large ministries.)

The Watergate investigation was launched in May 1972. Then President Nixon was impeached and removed from office in 1974 after evidence emerged that he had knowledge of the break in of the DNC offices in January 1972, and tried to obstruct the ensuing investigation. Will we see another political scandal of similar magnitude?

A convention against the use of Bioweapons was signed in 1972.

After the Tuskegee medical scandal was exposed in 1972, U.S. health officials admitted that African-Americans had been unethically “used as guinea pigs in the Tuskegee Study of Untreated Syphilis in the Negro Male.” Many lives were lost. Will other unethical medical practices be uncovered?

In 1972 there were thousands of lives lost in natural and man made disasters. What a year! For a full list of events (see 1972 – Wikipedia)

Grab Your Flashlight and Sunglasses

Ecclesiastes 1:9-10 sums things up wisely: That which has been is what will be, That which is done is what will be done, And there is nothing new under the sun. Is there anything of which it may be said, “See, this is new”? It has already been in ancient times before us.

If the darkness increases beyond 1972, do not distracted. Be ready and be encouraged dear friends. It means God’s Glory will be unleashed. Nothing will stop it. Let us, therefore, hold on to our flashlights (the Word of God) until we can don our sunglasses! Amen.

2 The People of Praise, Charismatic Catholics, and Fringe Religious Groups | The Exchange | A Blog by Ed Stetzer (christianitytoday.com)

5 History of the Jesus Movement | Spurs by Lu Webb (wordpress.com)